iKlip AV – a pro handheld grip for your smartphone

iKlip A/V is a device for phones enables the user to deploy professional microphones and monitor the levels all while holding both phone and Klip in the right hand. Now along has come the first smartphone broadcast mount for pro-quality audio/video iKlip A/V

The device has a great feel  it is hefty but not heavy. The upright section used to receive the multipin plug from the external microphone or radio mic receiver doubles also as a hand grip. 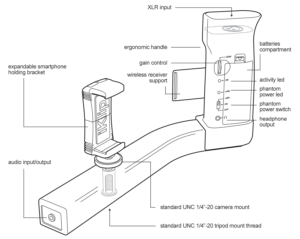 Any smartphone attached to the Klip suddenly feels like a DSLR, and the display of the phone feels like the viewport of a pro camera. All this due to the horizontal layout and format of the iKlip AV.

The device has been designed clearly with mobile broadcast professionals in mind, to provide pro-quality audio to mobile videos. It has an integrated microphone preamp with phantom power providing high-quality via an external microphone. Users can insert a microphone or wireless receiver into the preamp’s XLR input, then plug the 1/8” TRRS cable into a smartphone’s headphone/mic jack. 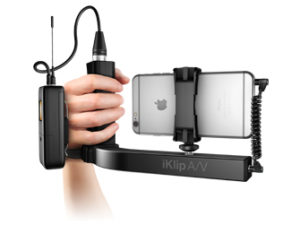 Another nice touch is the addition of a gain dial on the side of the handle which enables the user to give the signal a short boost. A/V provides 48v of power via two AA batteries, and also features built-in support for holding most popular wireless microphone receivers.The main function of a grip is of course to enable a moving shot to remain steady and the overall heft of the KlipAV certain facilitates this. Shots that would otherwise be more shaky are rendered steady by virtue of the device, and should the user need to steady the assembly further, a handy tripod socket is fitted beneath.

On the whole a lovely piece of kit which could easily enable a slew of smartphone reporters and filmmakers to finally lose those biggest of barriers to proper production with phones  steadiness of coverage and quality of sound signal. For the best recording quality possible, iKlip A/V also provides real-time monitoring and gain control options: It comes with an input gain knob plus an 1/8” headphone output. 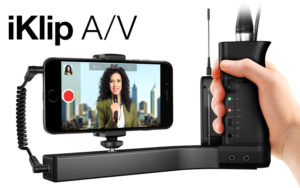